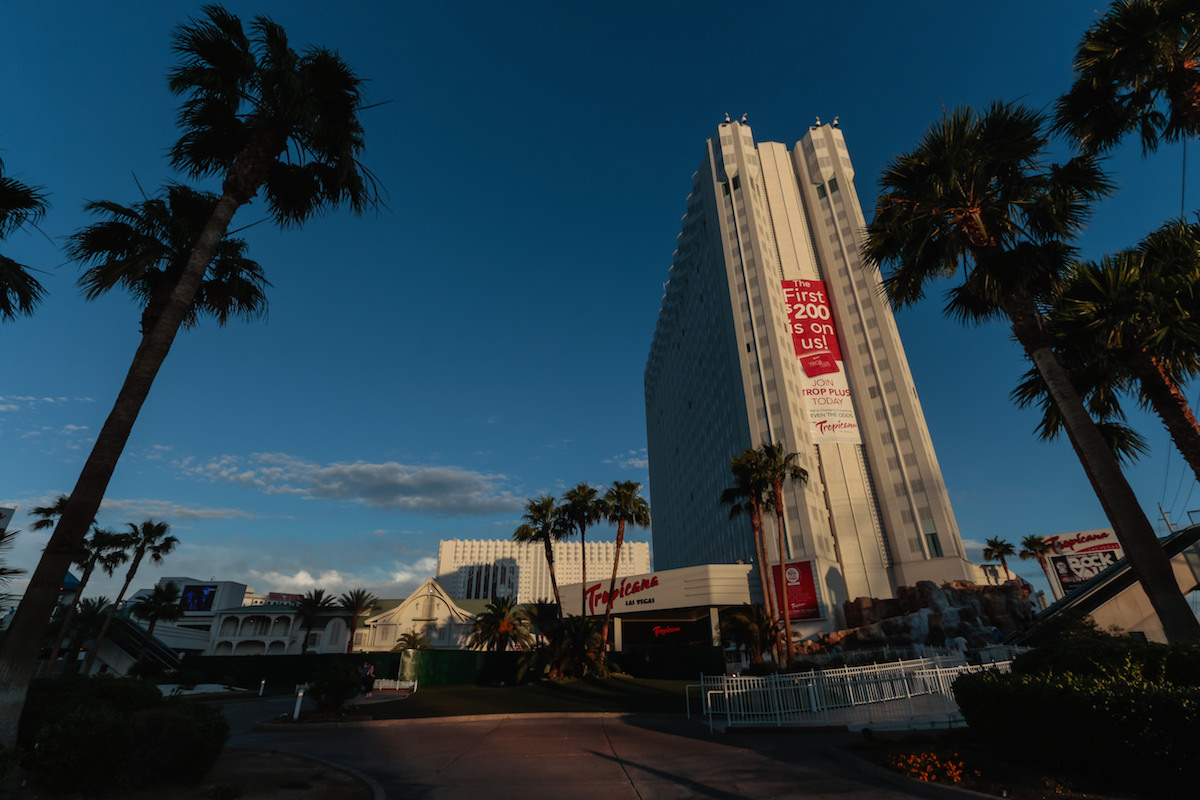 The night before I called the hotel and asked them for an upgrade, and the lady put me through to the VP of consumer affairs. I left a message and told him my wife and I are coming down to celebrate her 30th birthday as well as re-proposing to her. I asked if there was anything that could be done. When we arrived to the hotel I did the $20 tip and was also informed by the front desks that everything will be OK. We made it up to our room and found that we were upgraded to a top floor suite, with a bottle of champagne and chocolate covered strawberries. I don’t think this wouldn’t have happened if I never asked, I will be going back to the Tropicana every time we go to Vegas. This hotel made us feel like we were rich even though we are on a fixed budget. Thank you Tropicana for the wonderful time!!!!

I approached the older female clerk that was available at the desk.She was smiling and looked to be in a good mood. We had a late afternoon flight into Vegas, so did not arrive until 8:30 pm at night. I presented my Visa, with the 20 tucked under it, and asked about an upgrade, and mentioned that I saw on the internet that previous vacationers were very pleased with the renovated rooms in the Paradise tower.
She saw the 20, smiled, and tucked it to the side and said “Oh yes,” she had a wonderful room, with a view of the strip, on the 18th floor.
She said she would waive the resort fees, and gave us some free drink coupons, and after gibving us the keys, insisted we call her or come back to the desk if there was any thing else we needed or wanted a different room…The room was gorgeous! Plantation shutters, new carpets, new beds, lighting huge TV, Very clean, very quiet (high up).
We are planning to go back next November when the full renos will be done (new pools)

Not only would the desk agent not upgrade us, the system had us for in a one bed room instead of the two bed one booked and claimed they were completely booked and couldn’t fix it. (Oddly his manager could).

I checked in on a very busy (crazy busy) memorial weekend Saturday. The hotel was sold out so I wasn’t very hopeful, but I thought “eh, if I don’t get the upgrade, that’s $20 I would have fed into the slot machines.” The woman who helped us was very nice, even though the check in line was long and people were cranky and frustrated. I did the $20 sandwich and when I was next, I walked up to her, flashed her a smile, held out my “package” and said “Hi there, I booked into the garden tower because the paradise tower wasn’t available when I booked, but my friends are in the paradise tower, is there any way we can be upgraded to the paradise tower?” The lady saw the $20 and got a huge smile on her face. She goes “let me see what I can do for you sweetie” and starts tapping. She then says “I have a room on the 17th floor available in Paradise tower” I said we’ll take it. Not only did we get a room on the 17th floor, but we got a room with an awesome view of the strip. It really does work!

Dennise
Tipped:  $20 Upgraded to  Jacuzzi suite on the 20th floor of the Island tower  from  Garden...the cheapest room

I was so nervous!! I walked up to the front counter. Yolanda asked if we were in town for anything special. I told her we were celebrating my husband’s birthday, our anniversay, and it was our 1st vacation without kids. I asked if there were any upgrades available and slid her the sandwich. She thanked me and feverishly typed. She gave us our keys and said to enjoy the room. We are on the 2nd to the top floor. We have a separate living room with a bar. A jacuzzi in the mirrored bedroom and a steam room in the shower. I think she was going to hook us up before the tip but I am so glad I tipped her. She was soooo nice and maybe the tip helped. Thank you front desk tip…well worth twenty bucks!!!

I came across this site the night before our trip to Vegas. It took me reading quite a few success stories to convince me to try it. We were checking in the Tropicana on a Friday afternoon. I had a basic room booked for four nights through the weekend during spring break time so I was doubtful about my chances. I waited in line with my doubtful girlfriend who may have been slightly embarassed to be with me at the time. I readied the sandwich while waiting in line to check in. I was up, and advanced to a nice young girl (probably early 30’s) behind the counter. I handed her the sandwich and could tell instantly she knew what was up. I didnt have to say a word…just a polite greating. She immediately went to work on the keyboard. After a couple minutes she told me that she had good news and that we had been upgraded to a mini-suite for our four night stay. She also included six complimentary drink passes at the bar and two FREE show tickets to Hypnosis! She then asked me if I meant to give her the $20 bill and I replied, “Yes, its a tip. Thank you.” After we left the counter I turned to my girlfriend and gave her the arrogant “I told you so” wink, then ascended to our mini-suite.

Derek
Tipped:  $20 Upgraded to  none  from  Regular

Tried the $20 at teh Tropicana, got an older man at the counter. he was very polite but not into small talk and didn’t even look at us as he slid the $20p back to us. We are heading down again in a month, we will try a younger person this time.

I had booked our hotel through priceline awhile back and all I wanted was a 3 1/2 star on the strip for less than $50/night. I was staying 3 nights, Fri, Sat, Sun. I got the Tropicana, which I was fine with because I’ve stayed there before and it’s in a good location. And I was just staying with me and a bunch of my buddies, so we weren’t going to spend much time in the room anyway.

A couple days before I left, I was surfing the web and came across this website. I got so psyched up reading all the success stories, I couldn’t wait to try the $20 sandwich. I was nervous, but what did I have to lose? Worst that would happen is I’d get my money back and be in the same standard room.

Anyway, we were checking in early at 11am, so already I knew I was pushing my luck. There was a very short line and I ended up getting this middle aged guy. He said he needed an ID, so I just handed him over my license with my credit card and I had a $20 folded up between it. Immediately when he saw the $20, he smiled and said to us, “You guys must be bears fans.” I think he was trying to lighten the mood. Unfortunately, even though I live in Chicago (he saw it on my ID) I am no Bears fan (Green Bay baby!). So I told him and it turned out he was a Vikings fan. We talked about Favre and what not and the next thing you know he says that he’s got a room in the Island Tower available, 18th floor with a view of the strip. I said sounds good!

So we got all checked in and he double-checked that the $20 was a tip. (He said some people pretend they want change and take it back. Not cool.) I nodded and he pocketed it. Then he also told me that if I signed up for a players card and came back to the front desk, he could remove the $8/day resort fee that the hotel tacks on! So I did, and I saved another $24 right there! Totally worth the tip.

To be totally honest, even though the room was an “upgrade”, it’s the Tropicana, so it wasn’t as nice as my buddy’s room at the MGM. But it was clean and had an awesome view of the strip. I was very happy and so were the other guys in my group! They loved the story. I also looked up the price difference in the rooms online and it was at least $10 a night more.

Totally worth it. I’m doing it every time I go to Vegas now.

P.S. There was construction everywhere in the Tropicana and pictures of what the updated rooms are going to look like. It’s going to be a much classier joint real soon. I’m planning to stay there again when I go out.

I went for an older, more seasoned clerk during a very busy check-in Saturday (Marathon and Rodeo events). I calmly presented the $20 sandwich along with my reservation info and asked for any complimentary upgrades (and smiled during the process by the way). She was very pleased to help and got me up from a garden room to the top floor of the Paradise Tower. We got alot more space and a great view of The Strip looking Northward.

I handed her the sandwich, said my wife and I were there celebrating our anniversary, and asked if she could give us something nice. We got a mini-suite (little bigger room and tub, and a couch) in the Island Tower, with a nice strip view. Not amazing, but better than nothing and worth the $20