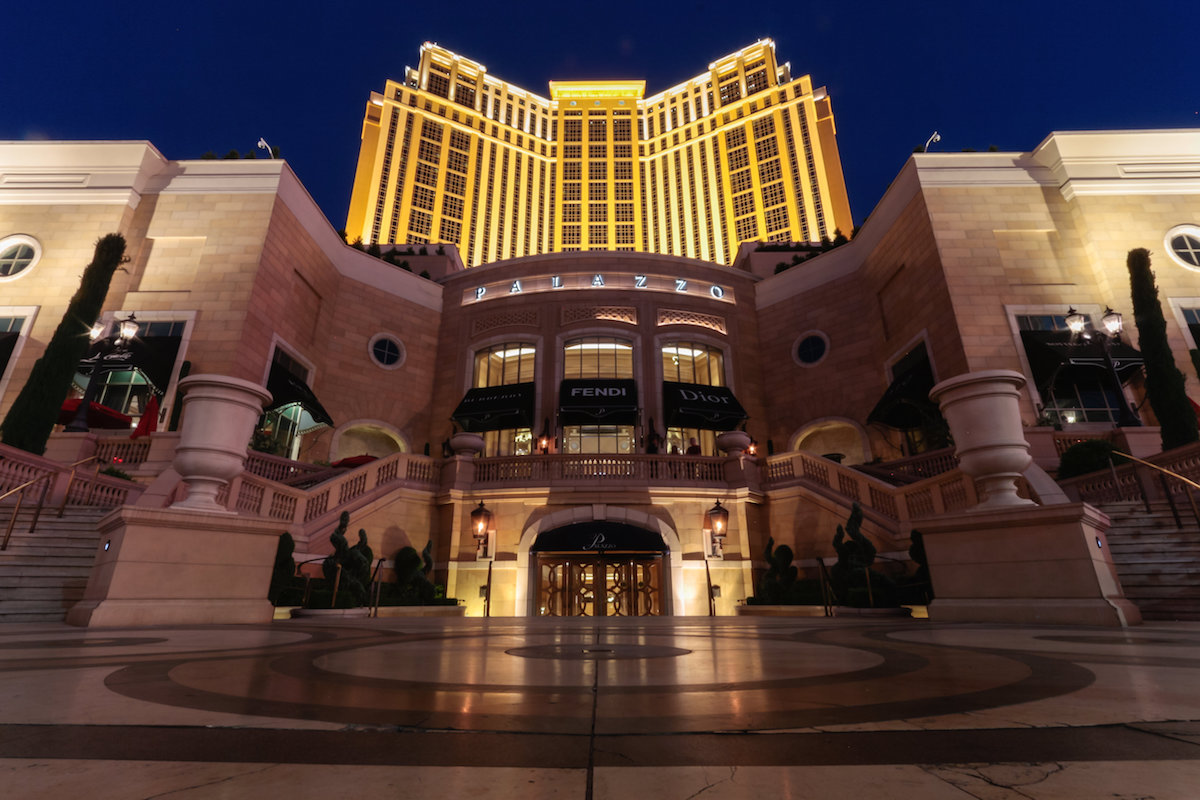 Checked in around 9pm. There were only a few check in agents and 2 people in front of me. Upon reaching the agent, I smiled and told her that “yes, I was indeed checking in”. She asked for a credit card and a driver’s license. Between the 2, I had $40 which she immediately pocked. I asked her if there were any complimentry upgrades. After typing on her keyboard for a few moments, she excused herself to ask her manager something. A few moments later, she came back and said, “yes, I think we can have something available.” She pulls out her room guide and showed me the floor plan for the Siena Suite and asked if that was acceptable. I readily agreed it was just fine. After asking if I wanted 2 beds and a smoking/non-smoking room, she gave me a room on the 47th floor. She then recommended that we eat at Cut for a great dinner. (It was indeed a great meal).

Checked in quite late(about 9:30 pm), there was no line up, as it was Monday evening.
I slipped the clerk 20.00 and kindly asked if they had any complimentary upgrades, preferably a larger room, and mentioned i would prefer a strip view too, but mostly was more concerned about getting the larger, more expensive room such as fortuna or conciege bella, she offered the Bella View which is worth 40.00 a night more, since i was staying there for 4 nights i got 160.00 value for 20.00 more, it was also on a higher floor (31st?) so i am content with it although i would have loved the bigger room more.

This was my third time in Vegas, and only the first time that i tried this front desk tip. I had originally booked the Palazzo Luxury with one bed. As I gave her the “sandwich,” I asked the clerk if there were any complimentary upgrades, and if there was one with double bed. She saw the $20 and said she would look at the availability. She bumped me up to the 33rd floor with a nice of the strip and into a Bella Suite. She then asked if I needed any change for the $20…I said, “Nope! That’s all for you!” and she said “Thank you” and seemed grateful. It was 3 pm by the time I checked in, and she said the room wasn’t quite ready but if I didn’t mind, she could call me when it was available. I didn’t mind as my friend and I went to grab a late lunch. About 20 minutes later my phone rang, and our room was ready.

There was a T-Mobile Event that was taking up many of the rooms and she had to search for a high floor with strip view that I wanted. She very adeptly kept the $20 out of sight and kept the registration process going quickly.

Was out to Vegas for my 23rd birthday and thanks to this website, I was able to get a free upgrade from a 1 king bed to a 2 queen. I was a lil nervous thinking the trick might not work but its been a success so far so I had some ease. At the Palazzo, if you needed 2 beds instead of 1 you would have to upgrade for one. The attendant asked for picture id and credit card. I had prepared the sandwich while waiting in a short line. As he saw the 20 he smiled and said thank you and quickly started to make conversation while he checked for a room. I told him it was my birthday and made some more conversation. Asked me if I wanted a 1 king bed or if a 2 queen bed would be desirable since my cousin was with me at the time. It was a total of 4 people but the hotel didnt know that. In the end, the nice gentleman got us a nice view of the strip without a wait. Definitely recommend the trick : )

He played coy with me and asked if I needed change. Immediately after getting the tip he asked if I was celebrating a special occasion. Why yes I am! I didn’t press for a different type of suite, the standard fit my needs well.

Palazzo is a beautiful hotel. Dropped the $20 between ID and CC, upgraded without a hitch! Great tip!

Thanks to this forum, I did something that I have never done before. And on top of that, this is our 1st time in VEGAS, so I was kinda nervous at the beginning. But I was asking myself, I am giving money to ppl, why would I be nervious….checked in the hotel a little later then I thought, around 4pm. I was send to 1 of the clerk, good looking clerk, Paris Hilton look alike clerk. Told her it is our 5th year anniversary romantic getaway, she was totally friend. Handed her the driver licence, the “sandwich” and the credit card. I was aiming for the “Siena Suite” so the extra $$$ is no big deal. She placed the “sandwich” down and listen to what I want for “complimentry upgrade”….I was saying I heard that Siena room is one hell of a room…she said she will see what can she do. She then talked to the manager and back like 3-4 minutes later….told me it will be $100 extra per night. So obviously the $50 does not work for Siena – a $500 a night room. After some talking back and forth, she offered us the Palazzo Luxury King with the balcony/fireplace but no strip view due to the location of the balcony room (back of the building),a bottle of Champaign and late checkout (2pm)….but I was not satisfied and told her I want something better……….after like 25 minutes of talking back and forth again and plenty of her talking to the front desk manager, finally they offered a strip view, a late checkout, a champaign, and the Palazzo “Fortuna” King room….it was a $400+ a night room, bigger bed area in an angle. Each floor has only 2 Palazzo Fortuna King units (according from the fire exit plan behind the room door)………I think that is the best that we can do for the 1st timer in Vegas and I accepted the offer.

Bernadette
Tipped:  $20 Upgraded to  Bella with view  from  Luxury (cheapest on Priceline)

I handed her the sandwich and asked if I could maybe get an upgrade. She never mentioned the $20 but made conversation while she looked, and I told her that the trip was my treat for my parents’ anniversary and my sister’s birthday (both true). She told me that the room they had ready didn’t have that good of a view, and that the room she wanted to put me in, with a better view, wasn’t open yet. I took her advice and waited for the better view, which only ended up being an hour or so. She was also very friendly the entire time and printed out a sheet of coupons for me.

To cut a very long story short, tried to check in around 12.30 on a Sunday afternoon, but there was no smoking suite available. 4 hours and several visits to reception later and they still didn’t have a single smoking room available in a hotel with 3000 rooms.

We finally accepted a non-smoking room under duress as we had a show that night and said that we hoped it would be a good room for the inconvenience and because it was my birthday next day.

We were allocated a room on the 49th floor and when we got there we were delighted to find we had been upgrade to a Fortuna Suite!! A massive 980 sq ft and it was simply gorgeous.