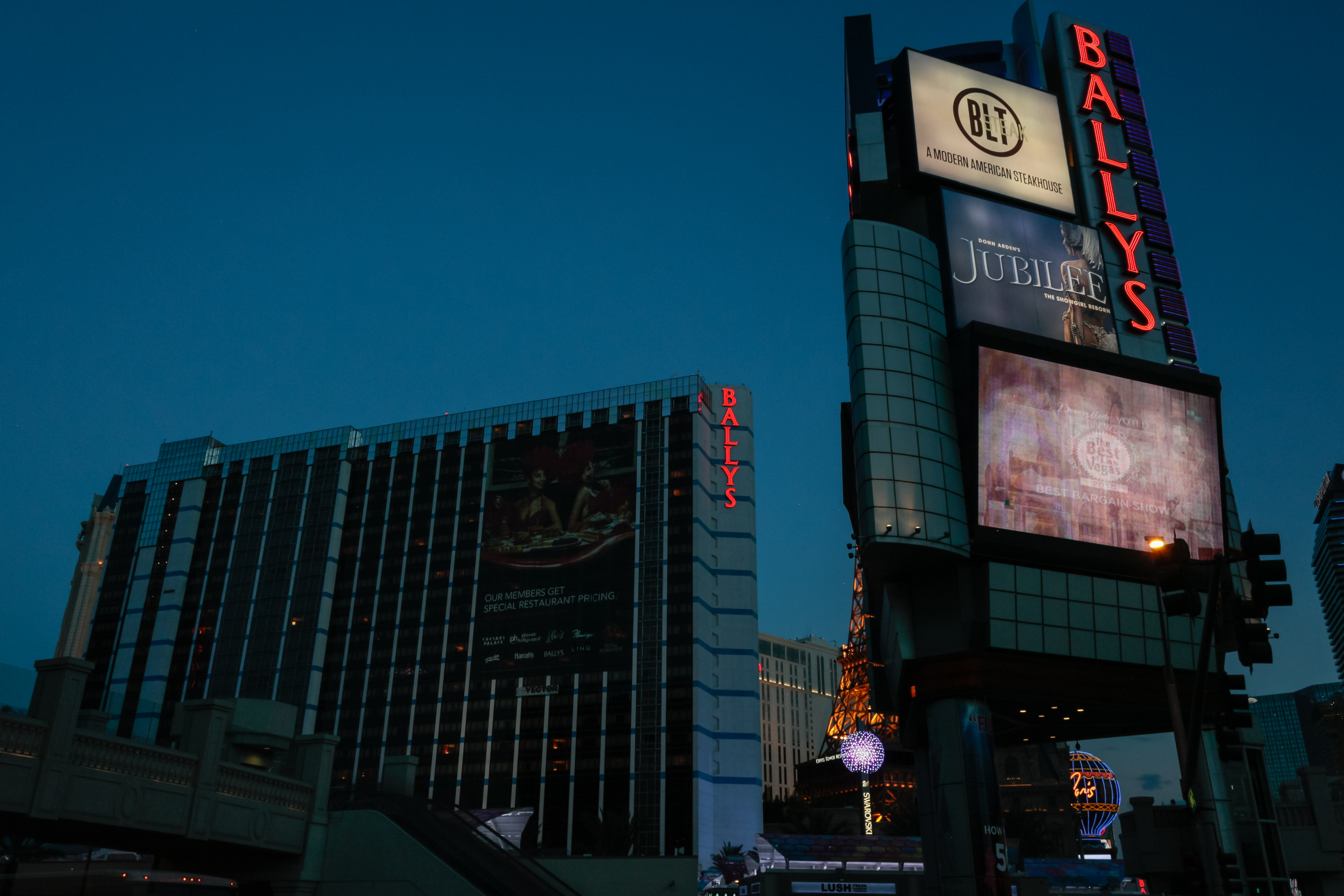 LOVED THE ROOM , EASY TO FIND, I WAS ABLE TO CHECK IN WAY BEFORE FOUR PM.

I knew we were at a disadvantage going into our stay because Bally’s and Paris were both completely full for the WPPI convention (it took a special favour to book even standard rooms several weeks prior). Additionally, we were staying for a week, and I knew it would be more difficult to upgrade for our duration.

She asked which hotel we were visiting and requested my ID and credit card. I handed her both with a $20 bill between them, saying “This is a very special week for us, and anything you can do will be greatly appreciated.” She began typing in her computer and then noticed the $20, which she picked up, handed back to me, and said, “Oh, this isn’t even necessary, sir. I’ll try to find you something great.” She then spent between 5 and 10 minutes trying different options in her computer.

Because the place was completely full, the only thing she could find was a Junior Suite, which she offered to us; however, the suite was a smoking room and I didn’t want to risk it. So we declined the suite and accepted our standard king room. Since our room was not ready, she instructed us to inquire about additional options with the front desk when we claimed our room keys. She was very helpful and friendly, and I’m confident she’d have been able to help out on another weekend, but these two hotels were simply too full.

I tried once again at the hotel when we picked up our keys, but the agent didn’t understand what I was asking. He also didn’t seem to have the authority to make any modifications — it felt like his job was to simply distribute keys.

Bally’s rooms are all generally large and clean, but our 15th-floor north tower room wasn’t anything special. Our bathroom had a mildewy smell, and everything else was rather average. Our view was disappointing: overlooking the casino roof and other Bally’s and Paris rooms. We could barely see the Eiffel Tower.

Overall, I’m disappointed it didn’t work out. I was so excited to report success back to this site, but I think the hotel vacancy issue was working against us. :\

I talked to my wife about the $20 trick, but we figured that it was only worth it if we were staying more than one night. Upon check in, I talked to the employee about how his day was going, explained how it was our first time at Bally’s, smiled a lot and acted happy to be there talking with him. I half-jokingly asked “are there any good rooms left?” He replied “I’m checking for you right now.” Yak, yak, yak, type, type, type. He gave me the keys. Without asking, or him mentioning… we found our room at the end of a long hallway on the 14th floor and it was HUGE, with a view of the strip, his/hers sinks, jetted tub, king bed, bidet, etc.

I wrote a letter of thanks/compliment about his service to Bally’s CEO and to the hotel/casino today.

At first he said that they weren’t giving out rooms yet and put us up in our reserved room and gave me the $20 back. Said he would call when they started to give out rooms and at 7:30 he called with the suite. The upgrade price he showed me was $350 above the normal room rate of $159. Great view and service. Suprised to get this kind of room for the whole stay at only $20.

clerk was quite snobbish and said upgrades cost 25 / night. ticked me off after reading about all those that worked.

Asked for this complimentary upgrade specifically and clerk was very accommodating even though we checked in on a Saturday!

Folded $20 bill under credit card… i begin to ask if an upgrade was avail..but even before i could finish my sentence he said “i would be happy to work something out for you” and slipped the $20 on to his keyboard. he started typing away,he asked what my preferences were- 2 queens non smoking. he said if i wanted a view of the bellagio i would have to sacrifice for a smaller room, but since i was sharing the room with 3 other girls he knew i would prefer something bigger. so he found me what he called a “Jr. Suite” in the north tower (newly remodeled) with a view of the Wynn. well when i got into the room, it was actually the same type of room i booked online, The Deluxe. however, we were on the 24th floor (there are 26 floors total) our view was of the mountains and bally’s pool. did not see the Wynn anywhere from my room. but when i went out to the elevator lobby on my floor and looked out the window the Wynn was in sight. so pretty much i think the $20 bux paid for a higher floor and away from the elevator, which was nice because it was quiet…but not a bigger room.
also, hotel policy states that if more than two people stay in room there is a $30 charge per extra person, he didnt charge me and gave me 3 extra keys without me asking. not sure if this was because of the tip i gave him or if they dont enforce that rule.
i was nervous and was almost going to chicken out, but then i thought to myself “what do you have to lose” and it worked out just fine.

Just back from Vegas. Did the $20 thang at Ballys. The clerk upgraded our room to a newly remodeled room in the North Tower. Everything in the room was new. According to what I have read in general for rooms at Ballys, we got a deal using this method.

Just got back from 2 nights at Bally’s May 19-21. Booked through price match on worldres ($240 for 2 nights split between 2 coupes) Checked in Friday at 11:30am at the airport. Wife and I chatted up the lady at the desk and my wife actually slipped her the 20 under the card asking for any kind of upgrades. Long story short, she moved us to the North tower 12th floor (wife said it was a no-brainer, absolutely worth the money just for that alone) Wife got keys to paris, rio, flamingo so she could get in their pools. She gave us a $10 gift cert to le provencal in Paris. And 2 11% Macy’s coupons. All in all, I’d say pretty successful. No luck on Jubilee tickets, though.