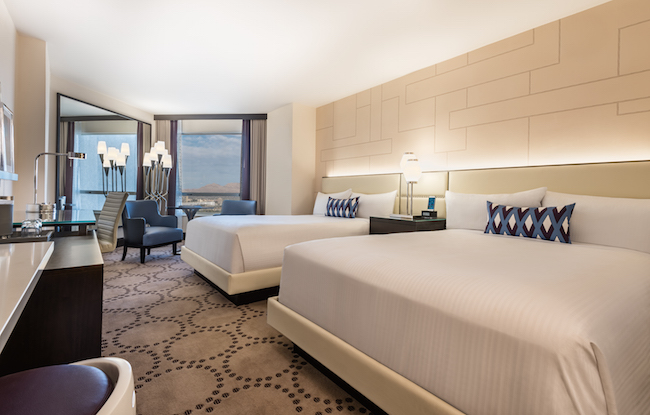 Wow, time sure flies! It’s been almost a year since we first told you about Caesars Entertainment renovating rooms at five Las Vegas hotels. Last year Caesars touted renovations to hotel rooms at Caesars Palace, Paris, Planet Hollywood, Rio and Harrah’s. The majority of those planned upgrades are complete as Harrah’s just completed a renovation and rebrand of their Carnival Tower. This tower is now known as the Valley Tower.

All 600 standard guest rooms and 72 suites in the Valley Tower have received a makeover. The tower is inspired by the purple color palette of Harrah’s but offers a more refined look. The Valley Tower features sleek décor with warm tones of gray and those infamous Harrah’s purple accents.

Every room now features a modern vanity with backlighting. The standard and premium rooms come with one king bed or two queen beds, a table with two chairs and a desk. While the design of the new rooms at Harrah’s is modern, it’s made for the conventional traveller. Next door at The Linq you’ll find streamlined modern hotel rooms targeted at younger travellers that don’t feature a vanity or desk.

The new suites in the Valley Tower were designed by Marnell Architecture. Each suite offers a separate bedroom, living room, and dining area. Each suite’s bathroom includes a whirlpool tub. The suites can be expanded by adding a connecting room with two queen beds to your reservation. Not all suites in Las Vegas have this flexibility. This is an excellent option if you’re travelling with the family and want to be in one large suite with separate sleeping quarters like you have at home.

The tower and room renovations aren’t the only updates at Harrah’s. Just in time for the kickoff of the football season, they revealed a refreshed sports book. The experience is similar to what you remember and now includes more than 40 new HD TVs, new bar stools and lounge chairs throughout the sports book. There are also built-in USB chargers to keep your mobile phones charged while watching the games.

Harrah’s is also adding the self check-in kiosks that you’ll find at Caesars Palace, Flamingo, The Linq, and Paris. While not a major addition, this is a welcome sight as the line(s) to check-in at Harrah’s can be some of the longest in Las Vegas.

While Harrah’s renovated an entire tower and its rooms, Paris has only upgraded some of their rooms. They’ve added a new category of basic room called the Burgundy rooms. They’ve also added some new suites. You can find more information on the Caesars blog.