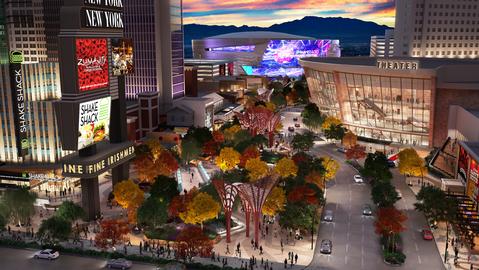 If you’ve been to Las Vegas in the past year or so you might have noticed that there’s been a lot of construction happening behind New York-New York and in between Monte Carlo. Well, much of that construction will be complete by early April when MGM Resorts opens The Park and T-Mobile Arena. The Park will officially open on April 4 with a mixture of restaurants, bars and entertainment. T-Mobile Arena will host its first event on April 6 when The Killers take the stage.

The Park is the land that will lead you to T-Mobile Arena from the Vegas Strip. The set up is similar to how The Linq promenade leads you to the High Roller observation wheel with one slight difference. There will still be automotive traffic allowed between the two hotels so that people can reach the Monte Carlo garage and valet from the Vegas Strip.

The vision for The Park is also different than The Linq. The mixed-use space will focus mainly consist of bars and restaurants and will be landscaped in a manner where you might want to lounge around or socialize outside. Yes, temperatures get hot in Las Vegas but that will be alleviated a little with multiple concepts that will provide shade. During the day, you’ll be able to relax in pockets of sun or enjoy shade depending on your mood. There will be mature trees and trumpet-like shade structures towering more than 50 feet above. Patio-style seating will encourage a social environment while seating alcoves tucked into large planters will provide areas to relax and sip a delicious cup of coffee from Sambalatte or a to-go beer from the Beer Garden (more on that below).

Keeping with the beautiful desert/park setting there will be multiple water features, including water walls stretching more than 100 feet in length along the entrance that will add unexpected visuals as will dramatic plantings that incorporate a variety of beautiful desert flowers. Landscaping will include native and desert-adaptive species of plants, which are able to thrive in hot and dry environments with minimal water. The Park will be more than just be a walkway with shops.

Entertainment at The Park will be provided by random appearances from live entertainers, such as acoustic guitarists and street performers. The wide variety of restaurants and bars include everything from a breakfast joint to a theatrical sushi experience to an American style beer garden. Probably the best feature of these venues is that all will be mid-level priced so anyone can enjoy. Here’s a quick look at the dining and drinking options at The Park

The Park seems as though it will become as much of a destination for drinking, dining and relaxing on the Vegas Strip as it will a walkway to T-Mobile Arena. Say what you want about the changing face of Las Vegas but this land wasn’t used for much more than an access road to park at Monte Carlo. The Park seems like a smart and useful use of space.